The wind turbine that couldn't cope with a gale: £250,000 tower crashes to the ground after its blades spin out of control 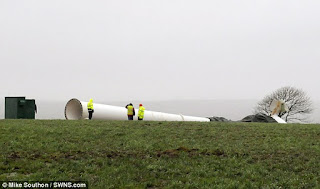 "A £250,000 wind turbine was blown down by gale-force winds after its blades span out of control and caught fire. The controversial 115-foot tower at East Ash Farm in Devon, near Holsworthy, toppled over and was left a 'mangled, blackened wreck'. The massive structure - which is as tall as a ten-storey building - collapsed in the stormy weather as Britain was battered by gusts of up to 135mph. The turbine was was only built in 2010, and was supposed to have lifespan of 25 years.
Oooops! (at least they didn’t name it ‘robust’(WUWT)
Wind turbine collapses in high wind (Telegraph)
Posted by ItsFairComment at 14:48