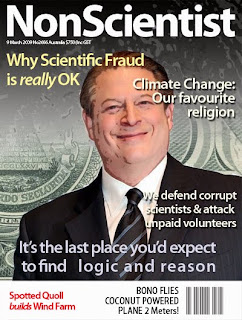 "Climategate: CRU scientists deserve Nobel Prizes – and very probably Knighthoods too – claims reasonable and unbiased New Scientist magazine ....this New Scientist is, of course, absolutely no relation whatsoever to the New Scientist whose reporting was singled out for praise by the Climategate scientists in the following email:

From: “Michael E. Mann”
Posted by ItsFairComment at 14:22