DEBATE: IS CLIMATE CHANGE A CON TO RAISE TAXES 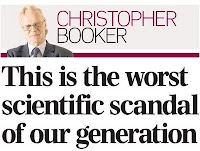 "THE scientific consensus that mankind has caused climate change was rocked yesterday as a leading academic called it a “load of hot air underpinned by fraud”.
Professor Ian Plimer condemned the climate change lobby as “climate comrades” keeping the “gravy train” going.In a controversial talk just days before the start of a climate summit attended by world leaders in Copenhagen, Prof Plimer said Governments were treating the public like “fools” and using climate change to increase taxes.
He said carbon dioxide has had no impact on temperature and that recent warming was part of the natural cycle of climate stretching over ­billions of years.Prof Plimer told a London audience: “Climates always change. They always have and they always will. They are driven by a number of factors that are random and cyclical.”

CLIMATE CHANGE 'FRAUD'
"Prof Plimer - author of Heaven and Earth: Global Warming, The Missing Science - told a London audience: “Climates always change. They always have and they always will. They are driven by a number of factors that are random and cyclical.”
-------------------------------------
The Tip of the Climategate Iceberg
"The opening days of the Copenhagen climate-change conference have been rife with denials and—dare we say it?—deniers. American delegate Jonathan Pershing said the emails and files leaked from East Anglia have helped make clear "the robustness of the science." Talk about brazening it out. And Rajendra Pachauri, the head of the U.N.'s Intergovernmental Panel on Climate Change and so ex-officio guardian of the integrity of the science, said the leak proved only that his opponents would stop at nothing to avoid facing the truth of climate change. Uh-huh. Mr. Pachauri and his allies are fond of pointing out that climate change science is bigger than East Anglia's Climatic Research Unit (CRU), and that other institutions' research backs the theory. This is true. But it's also the best argument for opening up to public scrutiny both the raw data and the computer code that lies behind pronouncements of looming climate catastrophe. Citizen-researchers—some of whom are, indeed, skeptics—have been after some of this information for years. CRU's apparent obstruction of freedom-of-information requests, as revealed by the leaks, is only the tip of the iceberg."
(WSJ)
Posted by ItsFairComment at 14:28